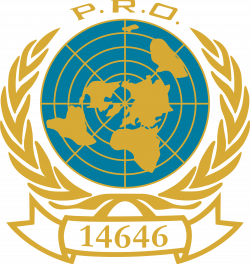 P.R.O. 14646 (Permanent Representative Organization 14646) is an International Supreme Treasury Organization and a major stake holder in the IMF, the World Bank and other global financial institutions.

The organization is devoted to global peace and unity and adherence to the principles that underlay the foundations of the “Millenium Development Goals” presented to the world in September, 2000 by Secretary-General of the United Nations, Kofi Annan. This comprehensive list of ambitious goals identifies the problems that must be overcome to solve mankinds’ global challenges in the 21st Century. These goals support the idea that mankinds’ approach to solving world problems like e.g. poverty or environmental issues must be from a global perspective. Today, “Millenium Development Goals” serves as the universal action plan for sustainable development that shares the benefits of globalization with all people – the Agenda 2030 of the United Nations.

The 20th Century founder members of P.R.O. 14646 HQ consisted of 17 prominent key-decision makers whose security codes (including international account numbers and codes) have been kept by the foundation and will be released under condition.
They are led by:

The origins of the resources of P.R.O. 14646 arise from donations made into Dong Men Hui (World Union) and included assets of the International Mei Hua Association and World Taoism Association, and 105 items valued in excess of Ten Trillion United States Dollars.

The asset pool of P.R.O 14646 is comprised of Security Bonds, International Currencies (e.g. British Pounds, US Dollars and Deutsche Marks) and Certificates of Deposits (CDs), placed into financial institutions throughout the world for a term period of sixty years. These assets are protected by guarantees of the international community under laws then in place and long term insurance policies up to one hundred years.

In the interest of long lasting security and as a protection against possible misappropriation of the asset pool, the founding father of the Republic of China – Dr. Sun Yat Sen – willed these assets to be citizen´s wealth. Prior to his death, he created a committee of appointed persons charged with managing and protecting these funds and assets from abuse.

It was Dr. Sun Yat Sen´s wish that these assets to be used exclusively for nation building in order to guarantee the welfare of future citizens. Therefore, neither individuals nor political parties or any nation may have a claim or access to the use of these assets for any other purpose.

Unfortunately, due to the unforeseen circumstance that the Republic of China has divided into “Two China” (Taiwan and China) with the division unresolved, the funds and assets cannot be applied in it’s original intended manner.

Thus, for the purpose of human prosperity in the 21st century, the Supreme Council of P.R.O. 14646 has decreed that its’ funds and assets be applied to assist other nations in their development and in the interest of international peace and global development.

Accordingly the S.A.V.E. Global Humanitarian Foundation/Fund was established to execute future operations and to realize the humanitarian objectives that all organizations share together. Further they aim to regenerate historical assets into a new 21st Century Investment Fund and promote a new era international financial system in the spirit of “proposed and executed by citizens to benefit citizens”.

For the purpose of human prosperity and in alignment with the Agenda 2030 of the United Nations, the main objectives of P.R.O. 14646 were already defined in the 20th century and expanded for the 21st century. The organizations’ aim is:
to promote perpetual peace for mankind and social well being worldwide to reinforce the improvement of educational and medical systems
to support global environment protection.
to maintain and/or foster the normalization and stabilization of the world economic system.
to bolster the development of infrastructure and thus seeks to finance or invest into public and private projects, either directly or in cooperation with other entities that share similiar objectives.
to deal with all financial and commercial operations either directly or through authorized corporations and companies.
to establish other permanent organizations and take part in any civil or commercial corporation as a shareholder or as a participant in foreign foundations.

Committee Members / Advisory Board of Directors:
The foundation reserves the right to preserve the identity of the nine (9) committee members.
Inquiries concerning this matter should be in writing and directed to the organization’s address.

Regional Coordinators of P.R.O. 14646 Global Foundation/Fund e.V.:
The foundation reserves the right to preserve the positions for and the identity of the Regional Coordinators (36+72 =108) worldwide.
Important Notice:
The Name List of Coordinators will be increased as required. Any Person whose name is not mentioned in the organization’s roster is not authorized or empowered to act or to represent the above mentioned organization(s) in regard to any and all activities. Persons who are representing the foundation(s) are duly identifying themselves by presenting valid original documentation which may be reconfirmed by the organization’s Global Coordination Office.
Misrepresentations of all kind by non-authorized persons constitute a criminal fraud which will be reported to the appropriate authorities for legal Investigation and Prosecution!

With beginning of the 21st Century the foundation took the Name of S.A.V.E. GLOBAL HUMANITARIAN DEVELOPMENT FOUNDATION / FUND e.V. It received the benefit of a legal and public status as registered, tax exempte organization (r.A. / e.V.) after the required registrations had been made with the appropriate Law Courts and International Organization(s). It has an international vocation. It is strictly apolitical and unreligious.